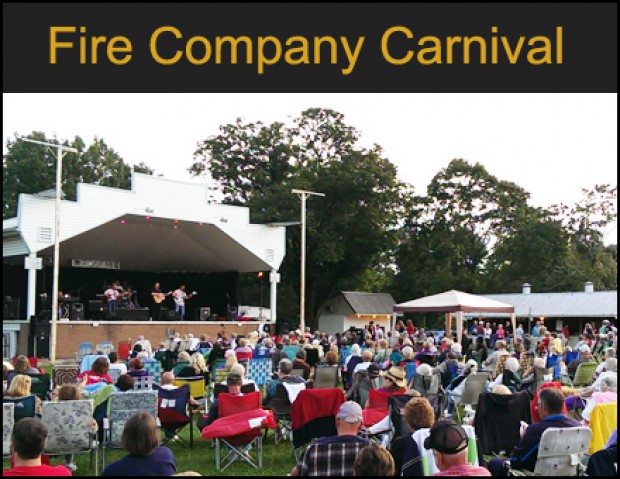 *The writer recognizes that this post is not in the form of a letter. But, to quote the great Lesley Gore, “It’s my (blog) and I’ll (write what) I want to.”

I grew up being exposed to live music. This was not because one of my caregivers was a career musician nor because I had parents who were ex-hippies (if you know my parents you are already chuckling over that one). I believe it was due to growing up in a rural section of eastern Pennsylvania where on any given Friday or Saturday night you can attend one of many “carnivals” and “fairs” which are organized and put on by a wide variety of local fire companies.

Isn’t it interesting how the place you live can and will shape your definition of certain words? This is an assumption, but I believe that when most people hear the word carnival or fair they probably picture a midway with a wide array of games, rides, cotton candy, sno-cones, popcorn, and so on. Back home, when someone invites you to attend a local carnival you should know that it would be a rare event for there to be even one ride, and that there might be one cotton candy/sno-cone stand (if you’re lucky), and the real purpose of attending, the true focus of this event, will be to see and hear live music. Yes, there might be a ring toss where you can win either glassware or knives, there will probably be a bingo tent, and without a doubt there will be homemade chicken corn soup because when you live in a place that appears to be 50% corn fields you’ve got to figure out a way to do something with all that corn. But, the real reason people drive 10, 15, 30, sometimes 40 miles from their homes on Friday and Saturday nights is to hear the hottest up and coming country music act or a local long beloved cover band from the comfort of their most favorite lawn chair.

In the city, when you want to see a band or musician perform, you typically have to go to bars or clubs that don’t open until later in the evening and have performers who often don’t make it onto the stage until even later in the evening. You have to show ID at the door, get a wristband/have your hand stamped, stand around, probably order drinks while you wait, endure a cloud of cigarette smoke (less likely these days, but still possible), and if the band has a decent following, secure your preferred spot in the venue by standing in the same location for hours while alternating bathroom breaks with your friends.

At the carnival you will drive down back roads until you see some boy scouts or volunteer firefighters directing traffic towards the fire hall parking. The parking lot is a large sweet smelling grass field. Perhaps it is overgrown. Perhaps it is muddy, in which case there will be hay added to the grass which produces an even earthier and more delicious smell. The “parking lot” will likely be surrounded by corn fields because Lancaster County has some of the most fertile soil anywhere and the people who live here have been farming since they first set foot off the boat fresh from Germany or Switzerland, or some other area in that region of Europe where pacifists and Anabaptists were being persecuted back in the 17th and 18th centuries.

The set-up is simple, no frills. Everyone brings their own seats. Lawn chairs and blankets are abundant. The woven webbed lawn chair with the aluminum frame has not gone out of style at these gatherings. Here they are worn and well loved, but still in operation, colorful woven splashes of avocado green, yellow, orange, and blue set up and ready to go. There is a stage, and in front of the stage there is space left open for people to dance and/or to stand so that they can be closer to the band.

The food is brought to you by your local fire company along with a few other vendors who have their own separate stands selling things like funnel cake, lemonade, or the newest addition to carnival life, the deep fried __________ (fill in the blank with candy bar, Twinkie, Pop-tart, etc.). The soup is highly recommended. No one here finds it strange to eat piping hot soup in the summer. The corn is fresh and abundant, and the soup is distinctly PA Dutch style; including pieces of hard-boiled egg, more corn than noodles or chicken, as well as saffron, and parsley.

The opportunity to see live music performed in an outside venue for a small fee is something that has been a staple of weekend entertainment in the area for a very very long time. My Aunt’s father Bobby supported her and his wife working as a professional musician at carnivals such as this throughout the 1940s, 50s, and 60s. He played the stand-up bass in various groups. He was in a musician’s union. He was the real deal.

Growing up, my parents took me to carnivals regularly. My mother will often tell the story about how she recognized that I could keep rhythm when as a toddler I was sitting in my stroller at one of these events and bouncing my foot along to the music. I saw Jerry Lee Lewis at a carnival, but I was too young to remember it. Maybe he was the one to cause my foot to bounce? Or maybe it was Marty Stuart, John Conlee, Ronnie McDowell, Waylon Jennings, Tommy Cash (yes, Johnny Cash has a brother, and he toured/played the carnival circuit) or The Mudflaps?

What started me reminiscing about rural eastern Pennsylvania summer entertainment was a clip I came across after doing a YouTube search for Flamin’ Dick and the Hot Rods. Yes, that is their name and I don’t believe there is any irony or innuendo intended. Folks back home as a whole tend to be either very religious and/or moderately to severely sheltered. That being said, it is probably only the most wayward of teenagers who would even have the thought to snicker over the band’s name. All of that aside, I was looking them up because I have seen them….live! At a carnival! It was a few summer’s ago, likely at the Reinholds Carnival, and the event delivered in all the ways I needed/never expected it to. There was soup, there were lawn chairs, there was Bingo, my parents ran into present and former accquaintances, we bumped into one of my former elementary school teachers, and all evening people stumbled back and forth between their seats and the food stands like food zombies carrying first a sloppy joe, then next a funnel cake, and then finally an ice cream. You can’t drink, smoke, or have sex back home, but no one will blink an eye if you consume sugar at an epic rate towards the diabetic finish line. Most importantly though, Flamin’ Dick and the Hot Rods were simply great. They played “Cara Mia” by Jay and the Americans and they pulled it off. Not an easy thing to do, even for Jay. Their performance exuded the air of professional musicians who are simultaneously having fun and getting paid with no ambition beyond those two possibilities. They were there to sing and play and help the audience to feel free and happy for a few hours. The grass smelled sweet, the music sounded magical as it bounced off the corn fields, and the people were entertained.

And so, after a lengthy, heavily nostalgic and biased ramble, I present to you, Flamin’ Dick and the Hot Rods circa 2016 at the Wernersville Fair via YouTube. I want to be very clear that my objective in sharing this clip is not coming out of a place of irony, or mockery, or too cool for schoolness. I encourage you to watch this clip and observe the joy that the band is bringing to those people who come and go in front of the camera over the course of the non-stop two hour set (Bruce Springsteen eat your heart out!).

It’s okay. There’s no pretention here. You are allowed to revel in the amazing power of live music being played for the sake of pure enjoyment.