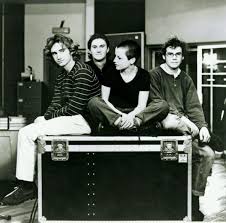 It should not have taken you no longer being on this earth for me to think about writing to you. But, now you are gone and your passing brings up so many feelings and memories for me. You were one of my first rock n’ roll loves. I adored you.

Even though women musicians and performers sort of had a bit of a feminist renaissance in the 1990s where it actually seemed like they might just be on the same level as men and they actually might not have to show more of their flesh in order to be considered a valid entertainer, you stood out.

You wrote all of the lyrics for “Everybody Else Is Doing It, So Why Can’t We?” That’s impressive in and of itself, not to mention the fact that everyone loved that album. High school girls, high school boys, Moms, Dads, siblings, teachers, anyone who worked in an office and listened to the radio, dentist hygienists, we all loved that album. It was beautiful, unique, and palatable. Not everyone can write an album that has strong lyrical content, sounds beautiful, and is accessible to so many different people at so many different points in their lives. You did that.

The December of my 9th grade year my (soon to be) closest high school friend gifted me a green stone/marble pendant necklace, a peppermint flavored Lip Smacker (great because it made your lips feel tingly) and EEIDISWCW on CD. My parents who were/are fundamentalist Christians were highly suspicious of, and controlling about, the pop culture content that made its way into our house. I could not listen to the majority of the music I was beginning to love (Nirvana, Smashing Pumpkins, Rage Against the Machine, Bouncing Souls, etc.) out in the open at home. I was closeted. Due to the accessible and non threatening nature of EEIDISWCW I was able to actually listen to that album, out loud, in my room. I could even sing along. Thank you Jesus!

God, I loved your voice. You had the most amazing voice.

In 1995 when given the choice to attend one outdoor summer concert I chose to go and see you and your band over going to Lollapalooza. I chose you over Hole and in hindsight this choice makes more sense than ever. We traveled 2 hours to New Jersey to see you. It was worth it.

I thought you were so very beautiful. I desperately wanted to have short hair but I was “scared” to cut mine off. Afraid I would look ugly. I already felt ugly. I didn’t need any further confirmation from anyone. You had short hair and you were beautiful. You were not afraid. You were my hero and eventually by the time I reached 12th grade I mustered up the courage to get my hair cut short. It was your picture I took into the hairstylist to provide an example of what I wanted. Thank you for being my role model.

You were sexy. It didn’t seem to be contrived or purposeful. You could play the guitar and sing and dance. From where I sat you looked like you were just being you and you just happened to also be sexy. We needed and continue to need women like you. Women who are not products. Women who have talents and show these talents. Women who are sexy who also do not have perfect teeth, hair, boobs, etc.

Your teeth were crooked. You were still sexy.

We need women who are sexy because they are showing themselves to the world and their showing involves a myriad of talents. A fully dimensional human. That was you.

I have not yet read all of the details of why you are gone. I saw a tweet from Chuck Prophet on twitter and I did a Google search and saw the words “bipolar” and the number 46 and then I started writing.

I could go on and talk about other albums you created, other songs that I loved which were written by you. I could elaborate on how you were a lifeline for me throughout my high school years and into college. But, none of that is going to change the fact that you are gone.

I’m sorry I didn’t write to you sooner.

I miss you already. Thanks for everything. You were a life changer.