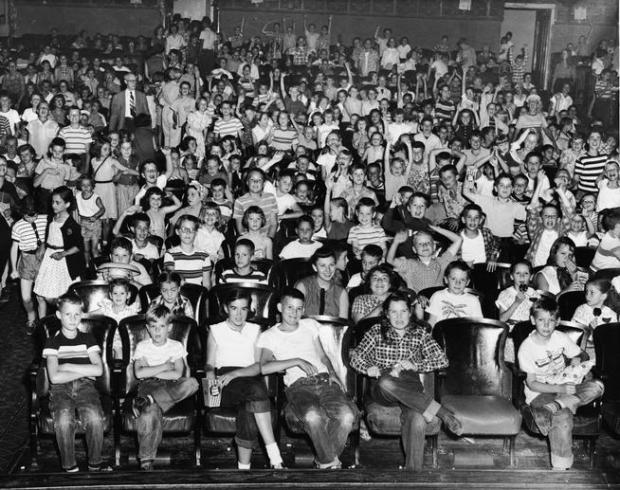 Rock ‘n’ roll as we know it might not even exist if not for the movies. That may be an overstatement, but it’s certainly true that rock’s first crossover success came via Hollywood. When the film The Blackboard Jungle appeared in 1955, its opening credits sequence propelled a novelty fox trot called “Rock Around The Clock” to the top of the pops, making the seemingly unlikely figures of Bill Haley and his Comets the world’s first rock ‘n’ roll stars. The ongoing sheet-shakin’ between rock and film has been consummated again and again over the ensuing decades, from Jailhouse Rock through A Hard Day’s Night, The Monkees in Head, The Ramones in Rock ‘n’ Roll High School, and the fictional Oneders in That Thing You Do!, plus whatever more recent iterations have occurred since I grew too old to keep up with what you crazy kids are up to. Just stay off of my lawn already.

The sheer abundance of great rock ‘n’ pop tracks that have appeared in movies makes the prospect of selecting my all-time Top 5 movie songs too daunting to consider. Honestly, I doubt I could even narrow down a list of my five favorite Beatles movie songs, and I’d still need room for at least two tracks from The Dave Clark Five‘s Having A Wild Weekend, The Monkees’ “Porpoise Song (Theme From ‘Head’),” Little Richard‘s title tune from The Girl Can’t Help It, the museum outings montage version of Lulu‘s “To Sir, With Love,” and Paul McCartney and Wings‘ license to thrill “Live And Let Die.” Among others. Among a lot of others! “Light Of Day” by Joan Jett & the Blackhearts, fercryinoutloud!

So, as an alternative, I figured I’d list five great movie songs from films I either didn’t really like or have never actually seen. That narrows things down to a more manageable field. By arbitrarily discarding any song used as a film’s title tune–buh-bye “Don’t Make Waves” by The Byrds and “They Ran For Their Lives” by The Knickerbockers–I came up with a quintet of popcorn-ready tracks that mean more to me than the films that delivered ’em. Dim the room. Kill your phones. And keep your trap shut until the closing credits roll. Lights! Camera! GUITARS!!

The only Porky’s film I ever saw in its entirety was the first one, and I did not care for it. I mean, c’mon–it’s not like it was The Hollywood Knights or something. But one of its sequels, 1985’s Porky’s Revenge, had a killer soundtrack, consisting mostly of oldies covered by acts like Jeff Beck, Willie Nelson, Clarence Clemons, The Fabulous Thunderbirds, and Dave Edmunds, plus Carl Perkins performing a new version of his own “Blue Suede Shoes” with two out of three Stray Cats. The soundtrack also includes George Harrison‘s otherwise-unavailable take on Bob Dylan‘s “I Don’t Want To Do It,” and Edmunds (who was in charge of the soundtrack) turns in an incredible original called “High School Nights.” But the highlight is this cover of Charlie Rich‘s “Philadelphia Baby” by The Crawling Kingsnakes. Who da Kingsnakes? None other than Robert Plant, with Edmunds, Paul Martinez, and Phil Collins. That’s a pretty impressive line-up for a no-account flick like Porky’s Revenge.

THE FOUR TOPS: “Are You Man Enough” (from Shaft In Africa)

Another sequel. I don’t remember whether or not I’ve ever seen the original Shaft, but I certainly knew Isaac Hayes‘ title theme song. I did see some episodes of the TV series that eventually followed. And everybody knew that Richard Roundtree was badass in the role of the man that would risk his neck for his brother, man. 1973’s Shaft In Africa brought “Are You Man Enough” to AM radio, and it was my de facto introduction to The Four Tops. I retroactively discovered the group’s fantastic ’60s catalog, but it all started for me with this song from Shaft In Africa. Can you dig it?

HERMAN’S HERMITS: “A Must To Avoid” (from Hold On!)

When I think of rock ‘n’ roll movies, I don’t think of concert films or documentaries. I think of scripted flicks with some excuse for a plot (however slight), and pop idols singin’ their songs. I primarily think of star vehicles, like Sonny & Cher in Good Times or Bloodstone in Train Ride To Hollywood. As a kid growing up in the ’60s, I only saw two such films: the magnificent A Hard Day’s Night and the significantly less-great Hold On!, the latter starring Herman’s Hermits. I’m sure I liked Hold On! just fine when I was six or whatever; I tried to watch it as an adult, but could not get through it. On the other hand, the soundtrack LP has its moments, particularly this rousing pop put-down, a song spirited enough that my power pop Fave Raves The Flashcubes used to include it in their live sets circa ’78 or so.

1980’s Robert Stigwood-produced Times Square was supposed to do for new wave music what Stigwood’s earlier success with Saturday Night Fever did for dat ole debbil disco: sell records, inspire pop culture, and generate a free flow of cold, hard cash. It did not do that. The few minutes of the film I’ve managed to catch in passing on TV support the prevailing opinion that Times Square was stuffy and overly serious in its tone. I think I’d still like to see it some day, and see what I think of it. The 2-LP soundtrack album is very good, comprised mostly of familiar gems by The Ramones,

Suzi Quatro, Talking Heads, Roxy Music, The Pretenders, Joe Jackson, XTC, et al., all of which were available elsewhere, but which made an attractive purchase when bundled together in one pretty package. “Flowers In The City,” a duet between former New York Dolls frontman David Johansen and Times Square co-star Robin Johnson, is unique to the film’s soundtrack, and it’s terrific. It was released at the peak of my interest in Johansen, and it’s as great as nearly anything on his first two solo albums, and better than anything he did after that.

PAUL McCARTNEY: “Not Such A Bad Boy” (from Give My Regards To Broad Street)

Paul McCartney‘s Give My Regards To Broad Street may get a worse rap than it really deserves. It’s not bad, but it’s not in any way special, either. Well, let’s amend that a bit–even by itself, the presence of McCartney does make it sorta special. I should add this to the list of movies I oughtta watch again and re-assess. The soundtrack is mostly very nice, including a remake of “Ballroom Dancing” and the hit single “No More Lonely Nights.” The album approaches the transcendental with two of McCartney’s best tracks of the ’80s–“No Values” and “Not Such A Bad Boy”–which are not on any other album. Both tracks feature McCartney playing with an ace combo of Ringo Starr, Chris Spedding, and Porky’s Revenge wunderkind Dave Edmunds, and they’re just as solid as anything Sir Paul ever did after leaving the act you’ve known for all these years. In particular, “Not Such A Bad Boy” is such a confident rockin’ pop number, oozing with swagger and amiable panache. It’s aching for rediscovery as one of McCartney’s best.

Okay, the house lights are on. Clean up your concession-stand debris and head for the parking lot. And let’s pop in a rock ‘n’ roll movie soundtrack to accompany our drive home.

If you wanna read some half-baked notions of how I would have (in theory) slapped together a rock ‘n’ roll movie when I was younger, check out my proposed Bay City Rollers movie, or my quarter-baked fantasy of an ’80s update of The Girl Can’t Help It starring Bo Derek (the latter also featuring bonus discussion of a Dolenz, Jones, Boyce & Hart TV series and a star vehicle for Ireland’s phenomenal pop combo The Undertones. I could rule the world if I had money. And ambition. And talent.