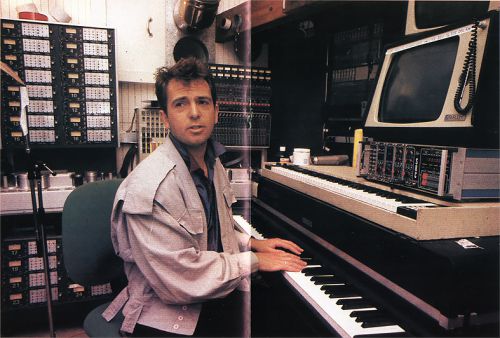 “I think I might like Peter Gabriel more than The Beatles.” This is what I whispered to my SO right before going to bed earlier this week. I hesitate, even now, as I type it out right in this moment because it still feels sacrilegious. The Beatles have been number 1 in my book since I first laid eyes on them in 2nd grade when watching “A Hard Day’s Night” with my brother. But, then I discovered you.

Your rise to the top with me was both gradual and immediate. In order to keep things organized and (somewhat) coherent I felt it best to document it in the form of a timeline.

Sledgehammer is on TV all of the time. I mean constantly. Every. Minute. It is inescapable and quite frankly, I find it lame. I am into Nirvana, Pearl Jam, Liz Phair, Dinosaur Jr, The Lemonheads, Juliana Hatfield, and anything cutesy that happens to be shown on 120 minutes (which my best friend records religiously so that we can watch later) think The Murmurs.

Sledgehammer seems like music for old people in comparison.

The irony is that I do like soul music at this time in my life. In fact, there was probably never a time in my life that I didn’t like soul music, as my parents raised me right by always turning the radio dial to an oldies radio station. I have liked Sam Cooke, Otis Redding, The Supremes, The Shirelles (Soldier Boy!), etc. since elementary school. I do not realize that Sledgehammer is an homage to all things Berry Gordy. I am not yet old enough to understand.

I quickly become obsessed with the John Cusack movie “Say Anything..” Yes, yes, I know, it is technically Cameron Crowe’s movie. But in 1997, according to me, it is John Cusack’s movie. He is a pure dream for all people who are seeking a partner who is thoughtful, quirky, a bit of a loner, and who most importantly knows things about music.

Recently, I have seen some articles floating around on the internet about how the scene where he goes to Ione Skye’s house in the middle of the night and plays “In Your Eyes” has been re-perceived as stalking behavior. I suppose it is. Much of what our culture views as romantic is often predatory behavior. What can I say? In 1997 I am sucker for predatory behavior (especially when it involves music). Consequently, I am also a sucker for “In Your Eyes.”

I work at a bagel shop during college so that I have money to buy books, do things with friends, and most importantly, purchase music. We listen to a classic rock station throughout the day and they often play “Solsbury Hill.” There is no denying it, “Solsbury Hill” is a song that has a high level of audio aesthetic. Naturally, I am drawn in.

I work with a guy named Rich who is older than me (probably late 30’s, early 40’s at the time). He is a musician. That’s why he is working at a bagel store with a bunch of college students. Because, unless you’re lucky, talented, extremely persistent, and/or some combination of those qualities, many musicians don’t ever end up hitting “the big time.”

I refer to the song as “Salisbury Steak” because it annoys Rich and I have a habit (some might fun it endearing, others might find it annoying, I guess it depends on the day/person?) of teasing people.

In between lathering bagels with cream cheese and my manager teaching me how to expertly frost and decorate brownies, I will turn to Rich and say, “Oh I hope they play Salisbury Steak soon!” When I’m out in the dining room wiping off tables and the song begins to trickle through the speakers I make eye contact with Rich and point upwards slowly mouthing the words, “salisbury….steak”. Rich just shakes his head. I am young, naive, clueless, and damn lucky that my parents saved up money for me to go to college despite the fact I floated through most of high school on a cloud of academic ambivalence. Rich is in the middle of his life, working at a bagel shop. Maybe I shouldn’t have teased him so often.

I begin to learn how to appreciate Phil Collins during this time. This is important because learning to love Phil is the gateway drug to you Peter.

For further explanation you can go here: Dear Phil,

I begin with toying the idea that the time has come to explore Genesis. After writing about Phil Collins, several people gave me recommendations regarding particular songs or albums by the band. I ask my SO to download some Genesis albums.

It takes 4 hours to get from my current home to the place where I grew up. 3.5 hours if you don’t stop to grab food or go to the bathroom. It is also a wonderful opportunity to listen to music. My SO and I leave at night to make it home for Thanksgiving dinner. The Pennsylvania Turnpike is mostly empty because it is late. Driving on the Turnpike during odd hours is (for me) like going swimming on a really hot day or eating the most delicious piece of pie. It just feels good. I adore long (mostly empty) stretches of road. I like to drive. I think it is in my genetics.

We listen to “The Lamb Lies Down on Broadway” in its entirety. We don’t skip songs. A few songs in, we stop talking but will occasionally make eye contact when the band manages to land an astounding musical trick. It’s like watching the circus with your ears. “Behold! As Peter Gabriel sings seemingly nonsensical lyrics about carpet crawlers with great emotion!” “You’ll be awestruck by Tony Banks dynamic use of synthesizers!” “Phil Collins will astound you with his unique and clever approach to the drums!”

As “In the Rapids” segues into “It” my SO turns to me and says “Whoa! What’s the name of this song?” I look down and say, “It.” The title is “It,” and we both laugh, because who does that? Who ends an album with a highly complex and emotional song and then titles it “It?”

After we finish listening I say, “If I was a musician and I heard this album I would quit. I would feel like I could never do better than this so why should I keep trying.”

We only read the Wikipedia article on the album after listening. Then we laugh and laugh about the story line. Rael? A Puerto Rican youth in NYC? Sure. Okay. I got none of that. But, I loved every bit of it at the same time.

I request to watch this for my birthday.

It has all of the answers to all of my questions about “I Have the Touch” and then some! You carry around a briefcase of cassette tapes! You swing on a vine with your children! You left Genesis (and fame) to be with your wife when your daughter was born! You are a giving me a cerebral boner.

Around 35 minutes in I turn to my SO and I say, “he has a hard time finding words. Can you see that? That’s why he uses music.” Then at the 39:14 mark you say, “I….feel…often in conversation, inarticulate. And if I have time..which I do on lyrics, to go through..uh..hone it down, word by word…um..measure by measure, then I feel I can get…exactly what I want.”

I understand this. This is why I have always loved writing. I get it Peter. And you get it too. This is why art is so imperative. It helps humans to feel connected and not alone. I’m sure I don’t have to tell you this. You GET IT.

I go to a yard sale where this older guy is selling his record collection. He has a boxes and boxes of clean, rare, and varied albums. He meets almost all of the criteria of a record collector (hoarder) as evidenced by the fact that his garage is packed with records, he is able to speak with me easily and readily about Jerry’s records, he has all genres of music, and he tells me “My kids don’t want it, so I have to start getting rid of it.” He asks for my email address so that he can email me when he begins selling the next subset of his vinyl empire. He has a hard time making eye contact. I like him. I wish he had a child who appreciated his obsession.

At his sale I purchase “Peter Gabriel Live.” You are a vision on the cover.

At home I find that this same album was previously downloaded onto our hard drive years ago my SO (he hoards downloaded albums which takes up much less space than collecting records but serves the same function) and so I drop it into my music library.

This particular version of the album is the trifecta because it was transferred from vinyl (I know this because at the beginning of DIY the song skips), it is live, and as you openly stated in the liner notes  “Although this album was compiled from four concerts in the mid-West of the United States, some additional recording took place not a thousand miles away from the home of the artist. The generic term of this process is ‘cheating’. Care has been taken to keep the essence of the gigs intact, including ‘human imperfection’.” I love you for your honesty. I also adore well produced/mastered music.

My parents go to this fundamentalist church that has a live band, and I accompany them when I find the strength to try to be a better daughter despite the fact that I strongly oppose the beliefs propagated there. Within the fundamentalist movement there is (what I believe to be both a contrived and dastardly) use of “modern” music to work people into a frenzy. After listening to “I Go Swimming” repeatedly I realized that what you are doing in that song is the same method and progressions they use as well. I’d like to believe they stole from you, but the fact is that I’m sure you stole from someone else.

I once attended a Transcendence Conference (yes, seriously, and ironically it only was offered once) and a group of singers and musicians from a local predominantly African American church performed as part of the conference. Before playing the leader of the group explained to us that many of the songs deliberately include key changes with the purpose of keeping people engaged in the music and to trigger emotion.

For more on that topic you can go here: Quora Q & A on key changes 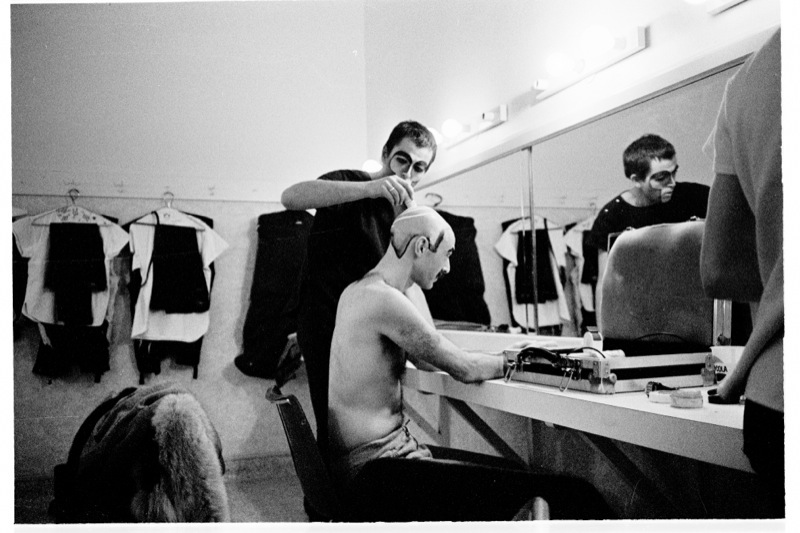 Once I get into something I like to research the hell out of it. The good news is that the internet is chock full of information on Genesis and has a decent amount of coverage connected to you. Although, I really wish that I could watch the BBC documentary about Genesis and I can’t find it anywhere (Help? Someone?).

You talk about how people “use songs” and how you then deliberately wrote a song about grief to try to help others. During this interview it becomes clear to me that you are not only a great musician, but also a real human.

Thank you for doing human rights work and trying to promote and support world music.

Thank you for being brave enough to go out on your own after Genesis.

Thank you for being smart and taking your time in the studio.

Thank you for being such a good human.

Thank you for creating music that I can “use.”

If more artists were like you the world might be an even better place than it already is.

Isn’t it great to be alive?